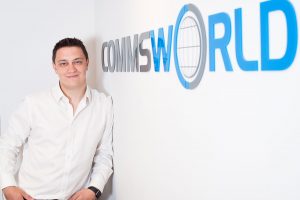 Commsworld has made history by becoming the first network operator to be on every one of the UK’s eight internet exchanges.

The Edinburgh-headquartered company has joined NCL-IX, a new interconnection point for data transfer from the USA to Northern Europe in the north-east of England, at the Stellium Datacentre in Newcastle.

Commsworld’s commitment to join the fledgeling IX underlines its firm belief that NCL-IX will become a crucial transatlantic digital link, dramatically altering the UK’s internet infrastructure landscape. It will achieve this by connecting the area to data from subsea, national and regional networks – including Commsworld’s Optical Core Network – for content, ISPs and cloud.

“This will make a profound impact on the UK Internet Infrastructure landscape, as currently it only has internet transit from the south of England, via the English Channel, and crossing into the neighbouring datacentre and connectivity megapack in Ireland.

“The north of the UK doesn’t currently have meaningful connectivity, but now the physical cable exists, we simply need the business case for a major International network operator to light capacity over it.

“This new IX also means that through our Optical Core Network, Commsworld’s customers in the North East, as well as the south of Scotland, will benefit from low-latency connections to other networks in the region, keeping traffic local, high quality and resilient.”

Bruce Strang, Chief Operating Officer at Commsworld, added: “A good illustration of the impact of NCL-IX would be through Commsworld’s connectivity services in the local area.

“Without NCL-IX, that traffic would have to travel to one of the other UK peering points – most likely London. With the round trip to London and back, additional latency – or lag – is added to the connection between the two networks, and they both have to maintain core capacity up and down the UK to carry the traffic.”

Gerry Murray, Chief Communications Officer at Stellium Datacenters, said: “It is great to welcome Commsworld to the NCL-IX. This further enhances a growing collaboration with Commsworld which already has yielded success. Commsworld’s membership of the IX complements the evolving IX ‘community’ of content and network providers coalescing into the North of England and Scotland. Stellium sees its role as complementing the drive by Commsworld and for example Scottish Futures Trust to enhance the telecommunications and data center infrastructure of Scotland. This further demonstrates the strength of the strategy Stellium is excuting on, as it developes its place, as a part of critical national UK infrastructure and a primary ingres/egress hub for international connectivity.”