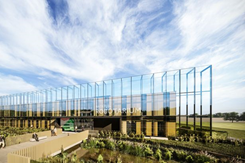 Construction has started on a new research facility for robotics and artificial intelligence, which will be the largest and most advanced of its type in the UK.

Based at Heriot-Watt University’s Edinburgh campus, the National Robotarium is supported by £21m from the UK Government, and £1.4m from the Scottish Government, as part of the Edinburgh and South East Scotland City Region Deal.

It will be a centre of excellence for pioneering research and is expected to open in Spring 2022.

Bringing together academics and global companies, the facility will provide a catalyst for entrepreneurship and is expected to deliver sustainable economic benefit to Edinburgh, the UK and beyond.

Although research projects led by the National Robotarium have already begun, the new building will provide facilities for researchers and knowledge exchange.

Hastie said: “By drawing upon the world-class talent of the staff at Heriot-Watt and our collaborative partner, the University of Edinburgh, alongside students at the Centre for Doctoral Training in Robotics and Autonomous Systems, the National Robotarium will form a centre of excellence for fundamental research and knowledge exchange to address real-world challenges and industry needs.

“The new building will facilitate a collaborative approach that is at the heart of the National Robotarium’s ethos, helping to accelerate research from laboratory to market and paving the way for the UK to take a leadership role in AI and robotics technology.”

Petillot added: “Our existing and new students will have the opportunity to apply their knowledge by working on real-world problems through internships and industry-led group projects facilitated by the Robotarium, accelerating their skills as they actively shape the future of the field.

“We hope to inspire subsequent generations about the positive impact of robotics and artificial intelligence, building trust, ethics and understanding into our research outputs and engaging the public regularly through school visits and open days.”

Among the specialist equipment will be dedicated laser labs, an autonomous systems laboratory and a living lab for trialling technology in a realistic home setting.

It will also include a ‘partner suite’ dedicated to industry, academic and government collaboration.

The building has a focus on sustainability and energy efficiency. In winter, the ‘intelligent façade’ will provide solar heat and recycle warm air. An ecological zone will integrate sustainable urban drainage systems, while a solar PV array will be installed on the roof.

Electric vehicle charging spaces will also be available, and to support the facility’s commitment to public engagement activities, linear grazing luminaire technology and an exterior projector will project graphics onto the façade.

Robertson Construction, the project’s main contractor, has been working in partnership with the university to safely start work on the building despite lockdown restrictions.

David Cairns, managing director at Robertson Construction Central East, said: “The commitment to sustainability and the wellbeing of its staff and students mean the facility will be equipped with state-of-the-art technology for energy efficiency and production and will boast considerable green space.

“The building will be certified to ‘Fitwel’ standards, meaning its design meets strict criteria for supporting occupants’ health, wellbeing and productivity.”

The National Robotarium will be home to numerous research projects aimed at addressing a wide range of global challenges.

Examples of projects include Socially Pertinent Robots in Gerontological Healthcare, developing the world’s first multi-user conversational robot for healthcare, intended to support the care of elderly patients and the Offshore Robotics for Certification of Assets – a national hub advancing technologies to remove humans from hazardous work environments.

As part of the UKRI Trustworthy Autonomous Systems programme, in November it was announced that the National Robotarium will spearhead research into ways to manage trust between humans and autonomous systems to support adoption in scenarios that require human interaction, such as in self-driving cars or autonomous wheelchairs.

It also forms part of the City Deal’s Data Driven Innovation theme, which aims to establish the region as the data capital of Europe.