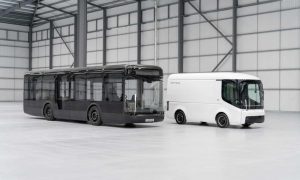 Electric buses built by Arrival, the UK-based manufacturer, will be tested on British roads for the first time later this year in a trial with the Scottish transport company First Group.

The tests will begin in the autumn of this year, starting with four of the first production vehicles produced at Arrival’s research and development facility in Banbury, Oxfordshire. Discussions are under way about further trials with other companies.

The trials are the latest step in the rapid expansion of Arrival, which has attracted investment worth hundreds of millions of pounds to build battery-powered vans and buses with zero exhaust emissions. The company, still yet to start full production, hopes that by 2024 it will make revenues of about $3.1bn (£2.2bn) from bus sales, along with about $10.9bn from vans.

Arrival is also looking at an undisclosed number of new sites for factories within the UK, a signal of its intent to ramp up output as it prepares a reverse listing on the Nasdaq stock exchange in New York at a valuation of $5.4bn (£3.9bn). The company’s main operations will remain in the UK.

Bus companies are hurrying to cut carbon emissions to meet clean air regulations in cities. First Group will not buy diesel buses after 2022, and it plans to eliminate exhaust emissions by 2035.

First Group is also running separate trials of electric buses made by the rival manufacturers BYD ADL, Optare and Yutong, as well as a trial of hydrogen fuel cell buses in Aberdeen, its home city.