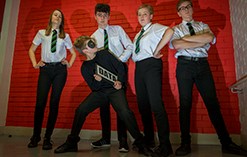 A nationwide Digital Schools Awards scheme has been extended to include nurseries in an attempt to inculcate digital skills at ever younger ages.

Six pre-schools across Scotland have been awarded ‘Digital School’ status in an initiative supported by tech giants Microsoft and HP.

Youngsters at Castlemilk Family Learning Centre, in Glasgow, were among the first in the country to be recognised by Education Scotland for having achieved the status.

They were joined by more than 70 secondary and primary schools at the largest ever Digital Schools Awards, held at St Mungo’s High School, Falkirk, where a total of 114 schools were officially recognised.

The extension of the Digital Schools programme to pre-schools follows the successful roll out of the initiative across secondary and primary levels and signals the growing importance for young people to develop digital skills.

The six nursery schools who are the first nationally to receive the extended Digital Schools Award status are as follows:

To date, more than half Scottish schools (51%) have signed up to the Digital Schools Awards – a nationally recognised programme developed in collaboration with Education Scotland and industry titans HP and Microsoft. The education initiative is the most successful of its kind in Scotland and aims to inspire schools to better integrate digital learning into the curriculum.

The Digital Schools Awards programme is driven by a consensus among policy, academic, technology and business leaders that schools play a central role in shaping Scotland’s future as a digital nation. It is also regarded as a vital tool in tackling Scotland’s growing digital skills gap, which currently has a deficit of around 8,000 jobs a year, according to industry figures. The presentation ceremony follows the release of figures from the SQA which show a 21% drop in uptake of computing science from 2017 – 2019.

As well as recognising schools which have successfully implemented digital learning within the classroom, awards were also presented to the first 10 Scottish schools to complete the Cyber Resilience and Internet Safety (CR-IS) Badge.  Launched in February 2019, the Digital Schools Awards CR-IS Badge aims to educate pupils on how to remain safe online.

Digital Economy Minister, Kate Forbes, said: “The Scottish Government recognises the knowledge, skills and attributes that children and young people need to acquire to thrive in our interconnected, digital and rapidly changing world.

“The Digital Schools Awards are a great way to encourage schools to develop new and innovative ways in which to achieve that aim, as well as to recognise excellence.

“My congratulations to this year’s award winners, who are being rightly celebrated for their dedication and enthusiasm for digital.”

Steven Pavia, HP, said: “Combining digital technology with the world-class fundamental learning applied at Scottish schools is crucial for the next generation to thrive in our everchanging cyber-physical world.

“The Digital Schools Awards is a great example of education, industry and government working together to prepare the next generation. To achieve the accreditation is a fantastic achievement, and I would like to congratulate each school on their success”

Paul Morrison from Microsoft said: “Technology is an incredible tool – one which encourages connectivity, creativity and independent exploration. Opening our young people to the possibilities of the digital world and providing them with the skills needed to prosper within it is an important task – and one we are committed to supporting. “

Stephen Phee, head teacher at St Mungo’s High School said: “We are delighted to be recognised as a Digital School. It is a testament to the hard work of our teaching staff, who have been instrumental to developing and implementing our digital learning strategies.

“As teachers, we have long understood the importance of embedding digital skills within the curriculum. The Digital Schools Awards provided us with the framework and support needed to bring technology into the classroom in an effective and responsible manner.”

To achieve Digital Schools Awards accreditation, schools are required to self-assess their developments in digital technology under common practice areas of Leadership and Vision, Digital Technology for Learning and Teaching, School Culture, Professional Development and Resources and Infrastructure.

The programme promotes skills such as digital innovation and creativity; computational thinking; advances in STEM; the use of digital technology to promote higher order thinking skills; support for digital equity and access and the need for cyber resilience.

Schools are encouraged to register for the programme through the www.digitalschoolsawards.co.uk website where they can undergo a self-evaluation of current practices and standards.