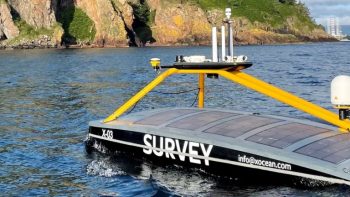 A robotic boat has completed the first uncrewed survey of fish populations around offshore oil platforms in the North Sea.

An unmanned robotic boat has been successfully used to survey populations of fish around oil platforms off Scotland’s north-east coast.

The surveying was part of a collaborative project involving the University of Strathclyde and ocean data company XOCEAN, Ithaca Energy, and the UKRI.

This project is part of the UKRI-funded INSITE (Influence of Man-made Structures in the Ecosystem) programme, which aims to better understand the influences offshore structures have on commercial fish populations in the North Sea.

Results from the survey will inform knowledge surrounding the effects of decommissioning oil and gas structures on marine ecosystems.

XOCEAN’s USVs transit unaccompanied, hundreds of kilometres from shore, without the need for a mothership.

USVs are fitted with high-end commercial fishery sensors and perform the same task as a crewed vessel, but without the need to send a person offshore. Information is delivered in real time to surveyors on land, anywhere in the world.

Each of XOCEAN’S XO-450 USVs are 4.5 meters in length, around the size of an average car. They can get within 10m of a platform, which is significantly closer than a conventional ship.

The next stage of the project will see Dr Dougie Speirs and Professor Michael Heath, of Strathclyde’s Department of Mathematics and Statistics, use the survey data to model the expected effects of a range of decommissioning strategies on the surveyed fish populations.

Dr Spiers commented: “The data coming out of this survey is providing us with an exceptional, high-resolution picture of what is happening to fish distributions around marine installations.

“It was fascinating to see real-time online images from the USV, and the resulting data will be invaluable as we construct our fish population models.”

Paul Shearer, the Environment Team Lead from Ithaca Energy, said: “We are delighted to have supported this important project to understand why fish congregate around structures in the North Sea.

“It is important that quality data and science is avaliable to enable more informed decisions to be taken in how the offshore energy industry interacts with the marine ecosystem. We look forward to supporting the project in future work.”

Both the project and the INSITE programme will run until 2023. The team plan to run similar surveys of more oil platforms using the USV next summer.