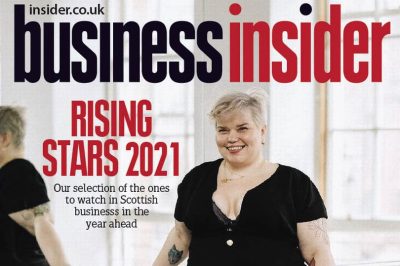 Insider has spotted many rising stars during its 37-year history, with one we selected back in 2006 now being among the most admired by this year’s talented group.

Brewdog was chosen by no fewer than nine of the 28 individuals profiled in the first edition of the magazine this year, with one of them describing the firm’s founders as “the poster boys for disruptive and fast-growing companies”.

Below are the first batch of 2021’s Rising Stars, any one of which could well follow in the breweries footsteps.

After completing his masters degree in computer and electronic systems at Strathclyde university Brown stayed as a researcher into data analytics with Prof Stephen McArthur.

In 2012 they co-founded Bellrock Technology to capitalise on the Lumen software they had created to help companies improve their performance.

Over the last couple of years they secured significant investment, doubled the team size to 20, grew its customer base five-fold and diversified into six new market sectors. When not working he enjoys spending time with his family at the weekend, cooking, playing music, hillwalking and mountain biking.

Read first had the idea for Livingston-based Snag in 2015 when she was walking along George Street in Edinburgh and her tights kept falling down.

“It was a very awkward incident and I thought that surely I couldn’t be the only person with this problem. This led me to conduct a survey with more than 3,000 people and the results were incredibly interesting, with 90% of people agreeing that their tights didn’t fit them properly.

From these results, Snag was born.” Read had a strong track record in marketing working for Sainsbury’s and People’s Postcode Lottery and had been chief marketing officer at Diet Chef and later its CEO. This year Snag’s turnover is expected to reach £40m and it employs 40 people in manufacturing the tights in Italy, with 33 in its “virtual” head office. Ultimately, Read wants to make Snag a £1bn company.

“I get really emotional reading the feedback from customers who feel that our products have changed their lives,” she says. “I frequently get praise from customers about our advertising of real woman. People don’t want to see supermodels; they want to see real people like their friends and families.”

After completing a Master of Engineering degree with Distinction in Computer Science at Dundee university, McCann embarked on another one in Medical Science.

In 2015 he abandoned his studies as he saw an opportunity to use technology to address the systemic issues in healthcare and create a more preventive delivery model. The result, five years on and after raising $23m, is a remote patient monitoring device being deployed around the globe.

Current Health doubled its workforce to more than 75 last year and deployed to tens of thousands of patients. Customers include Mount Sinai in New York and Imperial College NHS Trust in London.

At the start of last year, it expanded operations to Africa with a rollout in rural Uganda. It partnered with Massachusetts General Hospital and Mbarara University of Science and Technology in a study aimed at reducing maternal deaths and severe complications following caesarean delivery in Sub-Saharan Africa.

By 2022, McCann aims to prevent illness for one million patients around the world. His biggest influence was his grandmother.

“She gave her all to her family and is the strongest person I’ve ever known. She suffered recurrent illness throughout her later life and was frequently hospitalised as a result. The ability to bring earlier, preventive treatment to her at home would have given her a longer life and a far greater quality of life.”

Integrated Graphene was founded on the idea of working out a way of taking the cost out of graphene, which is said to be 100 times stronger than steel but very light and flexible, and unlock the commercial potential.

The first idea was worked on with a SMART grant in 2014, followed by a Scottish Edge award in 2016 and then developing the technology with its own money plus grants.

In November last year, the Stirling-based company received £3.1m in investment support to scale manufacturing and commercialisation. Marquordt’s aim is to become the dominating graphene company world-wide, much like Cambridge chip designer ARM. He plans to grow to £10m turnover and 50 staff in the next two years.

Marquordt says his biggest inspiration has been his daughter that he and his wife adopted at the age of 3½. “Her development and prospering is inspirational,” he said.

He says the firm’s software analyses project data to help spot problems before they happen, showing real-time portfolio delivery insights, data visualisation and predictive analytics in a truly objective way. It was spun out of consultant and solutions business Mudano last year, just as the Covid crisis was happening giving Mackay a big challenge.

Mackay, who had previously worked for Standard Life Bank, Capgemini, and then as head of IT strategy and development at Edinburgh Airport before moving to Mudano in 2016, said it already had a strong pipeline and had gained new customers from across sectors in the UK as well as in Japan, Singapore, Australia and New Zealand.

His ambition is for Sharktower to have more 3,800 customers and £130m annual recurring revenue by 2026.