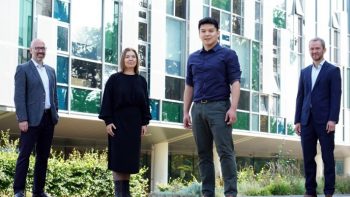 Wobble Genomics, a spin-out from the University of Edinburgh’s Roslin Institute, has raised £1.2 million following an investment round led by Eos Advisory.

Founded by CEO Richard Kuo in April 2021, the RNA sequencing specialist has developed a range of hardware and software tools that give scientists and clinicians a more detailed picture of underlying biology.

The firm said the investment will support the expansion of its team, drive sales and demonstrate its ability to improve clinical outcomes.

The funding boost will also form part of a £2.15m seed-round which includes a deeptech venture capital firm and a small number of private investors.

Richard Kuo, CEO and founder of Wobble Genomics commented: “There is a huge global market of scientists and clinicians who would buy our products as part of their sequencing work.

“On top of this, we plan to target a higher value market by leveraging our existing technologies with the overall aim of being the first global company to build a picture of disease states that are encoded in RNA.”

Andrew McNeill, Managing Partner, Eos Advisory, said: “Richard is already a globally respected researcher in RNA sequencing, and now has the ability to build a team to commercialise novel approaches that address the big issues and understanding of this exciting field of life science.

“The importance of RNA sequencing and its role in enabling clinicians to understand disease has only just been recognised over the last couple of years.

McNeill added: “This investment sits at the heart of what Eos works for – backing the very latest and most promising innovations that have the potential to have a positive impact globally.”

Wobble Genomics is the first investment from the newly raised Eos EIS Innovation Fund, which invested alongside the Eos Syndicate.

This funding round also marks an important evolution for the St Andrews-based firm, which has had a successful year that saw mycoprotein supplier, Enough, secure a global deal with Unilever and a £42 million Series B investment round.

Nicola Broughton, formerly an Investment Director at Mercia Asset Management with over 20 years’ experience of working in leadership positions in the life sciences sector, was heavily involved in Wobble’s spin-out process and investment raise, and was appointed Wobble’s Chair in July.

In April this year, John Duncan, founding director of Alba Equity, took up the role of Finance Director.