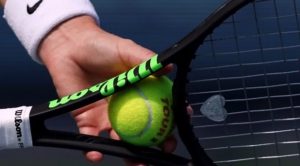 Founded by former tennis professional Collin Powers, Ellyra is a VR tennis simulator created to allow those previously excluded from tennis because of social, economic or disability reasons to enjoy training, playing, and competing in the game.

“We are so thrilled to have partnered with Ellyra and Collin for our event in London. The on-court activation was mimicked by Collin in the virtual reality devices and the consumers had an amazing experience on and off court.

“The Ellyra Tennis product is such a great way to engage with all different types of people while showing them what the sport of tennis is and then taking it onto the court”, stated Val Vladea, Influencer Marketing Manager at Wilson.

Wilson invited a group of disabled young people to its launch event to experience tennis first hand for the very first time. Notably, one of the young people had not been able to enjoy the well-understood physical and emotional benefits participation in sport brings because he suffers from severe neurological disabilities.

After experiencing Ellyra his mother said: “It was amazing to watch my son’s initial reaction to Ellyra’s VR experience. He had never tried tennis before, and I was doubtful that he would agree to put the VR headset over his eyes.

“However, the huge smile on his face said it all. He was fascinated by the experience and even realised that moving his hands whilst holding the hands’ part is actually moving something that he could ‘see’.”

Also attending the event was International Paralympic Games Committee member and world leader in the development of disability tennis, Mark Bullock, who commented:

“It was great to see the impact Ellyra’s VR tennis game had on someone with additional needs.  When I first tried Ellyra tennis I believed it had the potential to make tennis even more inclusive. To see it in action was amazing.”

Ellyra founder Collin Powers said: “When I had the idea that became Ellyra I was intrigued by the opportunity to open up a game that had given me so much during my amateur and professional tennis career to those that had never had the opportunity because they simply didn’t have access to tennis courts, or the space required to play.

“During development the response to Ellyra was brilliant, but to have a huge tennis brand like Wilson choose Ellyra to launch its latest racket and to see the impact Ellyra had among young people who would normally never have the opportunity to enjoy what tennis can bring to anyone is fabulous.”