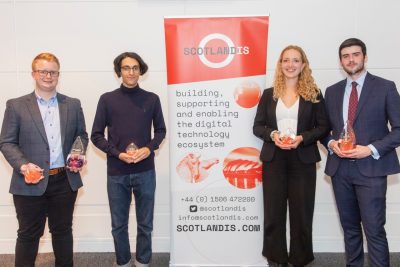 An Abertay University student has been named Young Software Engineer of the Year at the 33rd annual ceremony from Scotland’s tech trade body ScotlandIS.

Daniel Gearie took first place at the awards ceremony, held as part of the ScotSoft2022 conference in Edinburgh yesterday evening (29 September) for developing software that can physically locate the position of a drone operator using a variety of tools and techniques.

While drones are being used to transform many industries, they can be problematic in the wrong hands – airport disruptions providing a recent example. Locating drone operators, rather than the drones themselves, can provide longer-term solutions to these issues.

When reviewing submissions, the judges were particularly impressed by the way Daniel identified gaps in the effectiveness of current market-leading technology to track drone pilot locations, with his prototype recognised for being expandable in its use and potentially more secure than other systems.

While Daniel took top spot, the awards recognised a further three students for their outstanding work.

Lilli Freischem, of University of Edinburgh, was named runner up for producing a new software tool that can identify essential genes – ones that are critical to the survival of an organism – in a wide range of life forms. The detection of essential genes is a grand challenge in personalised medicine, the discovery of new drug targets in cancer, or in the identification of genetic markers for the diagnosis of disease. Lilli’s software is able to communicate seamlessly with tools that are already widely adopted, and end users can use its improved predictive power with little additional training or technical expertise.

Robert Gordon University graduate, Raufs Dunamalijevs, was also a runner up for his work to implement two new penalty estimation algorithms in quadratic unconstrainted binary optimisations, improving the accuracy of combinatorial optimisation problems, which forms an important and complex part of computer science and AI.

Finally, Callum Inglis, Computer Science graduate from the University of Strathclyde, was awarded the Leidos Best Engineering Prize at the ceremony. He won the award for developing a low-cost, off-grid sensor monitoring system, capable of remote sensing in areas without any existing infrastructure. While the system is built to be applicable to many industries, Callum’s demonstration of his system focussed on indoor and outdoor air quality data collection, which could ultimately be used to support and inform public health decisions.

The longstanding Young Software Engineer of the Year Awards are held annually by ScotlandIS, to champion budding talent in the Scottish technology industry and highlight the innovation and ideas coming from Scotland’s university students.

Karen Meechan, CEO at ScotlandIS, said: “This year, we are celebrating ideas that display an impressive combination of innovation, creativity, and scalability. Each idea brings a potential real term impact to its related sector, making a genuine contribution.

“For decades we have recognised some of the best minds coming from our universities, demonstrating the strength and breadth of tech talent being developed within Scotland.

“In a sector that shows consistent demand for skilled talent, it’s important that, as an industry, we take time to recognise the individuals who truly embody the definition of talent.”