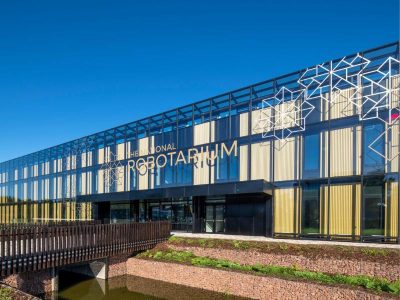 The UK’s largest and most advanced robotics centre has opened in Edinburgh.

The £22.4 million National Robotarium was opened on Wednesday and will pioneer research across multiple disciplines including soft robotics, field robotics, co-bot and tele-operations.

The facility, which has utilised expertise from both Heriot-Watt University and the University of Edinburgh, will work with Tata Consultancy Services (TCS) on its research projects.

The collaboration agreement also covers areas of urgent societal need including social and geriatric care, a sector in which the National Robotarium is already well-known.

And the centre has already teamed up with the Scottish Fire and Rescue Service to develop new helmet technology which could help firefighters quickly map their surroundings, navigate hazardous environments and efficiently locate fire-scene victims.

Combining feeds from thermal cameras, radar and inertial sensors mounted on a standard-issue firefighting helmet, the technology uses artificial intelligence to provide wearers with real-time information that can help detect victims, recognise teammates and provide an accurate understanding of their own location.

It’s hoped that the first-of-its-kind technology could support firefighters and scene commanders to more safely navigate adverse or low-visibility conditions such as smoke-filled fire scenes and reduce the time it takes to rescue victims.

“The opening of this dedicated, state-of-the-art facility is another important milestone in that story and one which I believe demonstrates Scotland and the UK’s role at the forefront of global developments in AI and robotics.”

He said: “Building on research strengths of Heriot-Watt University and the University of Edinburgh, the partnership between the National Robotarium and TCS, a leading investor in Scotland with whom the Scottish Government has regular engagement, will be key to developing robotics and artificial intelligence solutions. This is particularly significant for improving social and geriatric care in Scotland, alongside wider innovations.

“The National Robotarium will be a major asset in maximising Scottish and UK strengths in robotics and artificial intelligence and in accelerating adoption of technologies that can transform Scotland’s economy and society.”