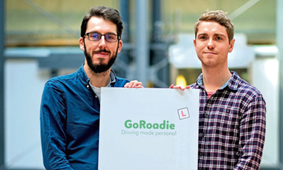 Learner driver start-up GoRoadie has completed its seed investment funding round with Edinburgh-based Apollo Informal Investments, along with UK-based angels.

Founders Michael Carr and Barry White describe their company as “like Airbnb for driving lessons”.

Since launching in Dundee in 2018, GoRoadie has expanded to Glasgow, Aberdeen, Nottingham and Leeds.

Mr Carr said: “So far, we have 500 driving instructors using the platform to find students; the potential is huge.

“Leeds is our newest market and already 10% of students use us to book an instructor. In Dundee, it’s 25%.

“Obviously our business dropped off significantly during lockdown but it’s picked up strongly in England, where lessons were allowed again from July 4.

“We looked at the 2008 recession and were able to demonstrate to the investors that the market for driving lessons isn’t affected too badly in a downturn and bounces back quickly.

“We are extremely pleased to have finalised this deal, especially during the current economic climate.”

Mr Carr said the company was likely to expand into Manchester and Birmingham later this year but the real focus over the next year will be to prove the fundamentals of the company.

The company then plans to do a larger investment round next summer and to rapidly scale-up in the second half of 2021.

“Our targets are razor-sharp in our mind; ensure we have a sustainable business in the next 12 months, launch GoRoadie in two more major UK cities and increase the number of instructors using GoRoadie by 160%,” Mr Carr continued.

“Apollo are very passionate and want us to expand our goals. They want a big trial internationally sooner or later and making the company as big as possible.”

So far, more than 4,500 students have successfully found an instructor using the app, which is free for the people seeking lessons.

Normally a one-off referral fee is taken for each student that books an instructor through the app, but this has been waived for a short period as instructors build their diaries back up.

Apollo Investment’s Michiel Smith said: “We first met GoRoadie at The Start-up Race and were impressed with their pitch.

“They are dedicated to connecting learner drivers with a driving instructor that suits them while also creating tools aimed at making instructors’ day-to-day easier.”