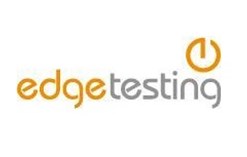 One of the UK’s fastest growing and largest independent software testing companies, Edge Testing Solutions, part of Eurofins Digital Testing, is encouraging Scottish students to consider software testing as a career with a target of a further 100 graduates over the next three years.

Since 2013, the company has been actively promoting software testing as a career for anyone interested in the digital sector or computer science through its Edge Academy.

A two-year learning program that combines hands-on experience with classroom-based software testing training, the Edge Academy is open to a range of candidates interested in testing as a career, including school leavers with a passion for IT, graduates, graduate level apprentices and older career changers.

Two recent Edge Academy graduates from the University of Strathclyde, Stuart Dougans and Grant Martin, both started out with very different career intentions before joining Edge Testing. Stuart, 24, from East Kilbride and Grant, 22, from Glasgow came to Edge Testing after studying mathematics and architecture respectively. However, they knew that being a mathematician and architect were no longer their preferred career paths.

Grant explained: “I came to realise that architecture wasn’t going to be for me as every time I ran into technical issues and errors with the software used to create building plans, I found myself more interested in why they were happening and learning how to fix them. I’ve always liked to find out how things work, but had never considered software testing as a career before as I didn’t really know much about it. During the summer after my second year of architecture, I was searching online for jobs and I kept coming across Edge Testing as a company getting young people into apprenticeships.

“There are not a lot of other options in Scotland for software testing apprenticeships, and particularly those that don’t require you to already have some knowledge, experience or work history. This is why Edge Testing’s Academy is so good. I had wanted to find a graduate program where I could work to gain experience at the same time as I continued studying, to put me in a better position for work after graduation and the Academy fit that bill. It also offered me a wage from day one.”

Since joining as apprentices, Stuart and Grant have both been given the opportunity to work on several client sites, including a leading utilities company and a public sector body specialising in loans, as test analysts. Grant is now in his third year of studying a Software Development BSc at the University of the West of Scotland (UWS), as a part of Edge Testing’s two-way training relationship, while Stuart is a Technical Consultant, working on a client project in Oxford.

Stuart commented: “During my time at Edge Testing, I’ve worked on two client projects. The first was in Glasgow and now I’m working down in Oxford on a long-term project there. It’s exciting to travel outside Scotland for work and I’m constantly learning, even after graduating the Academy. Software testing wasn’t even a consideration for me, but it’s a great fit as, it’s allowed me to put into practice all of the theory from my university placement. I’ve gained knowledge, skills and capabilities during my time at Edge Testing, including automation testing tools, and am still always learning on the job. I got a DevOps certification only last week.”

When Edge Testing partnered with a software company that specialises in performance testing products, Stuart studied for a certification in that partner product and he has also created a few additional courses since leaving the Academy. Those courses are now part of the Academy and Stuart conducts both of them, teaching new graduates coming in what he has learned while at Edge Testing.

Stuart continued: “I would recommend software testing to other young people as it’s a dynamic career choice. With a variety of clients and projects, new software to test and industry practices to keep on top of, software testing is always changing so there is never a dull day.”

Edge Testing, which has been awarded the highest level Gold status ‘Investors in Young People’ accreditation, has strong relations with a number of Scottish universities, including UWS, Strathclyde, Stirling and Napier Universities . Grant and Stuart are just two of many Scottish students that Edge Testing has had come through in its Academy.

Nadia McKay, Testing Services Director, concluded: “We are championing software testing as a dynamic career choice while at the same time building a pool of talented testers. The experience that our clients have had with Stuart and Grant as part of the Edge Testing team has been so positive, that it’s helped us secure more business and opened further opportunities for other graduates. Edge Academy is popular because each graduate is paid throughout the training and has a job at the end of the two years, so it’s a proven career path. We saw the 100th Academy graduate successfully pass last summer and will continue to celebrate adding motivated testing candidates to our team from universities across the UK.”