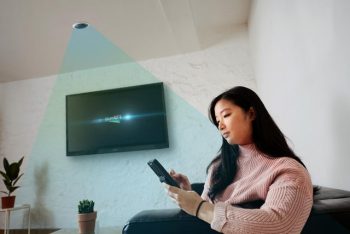 PureLiFi, the Edinburgh-based firm behind technology that uses light to transmit data, has unveiled what it claims is a ground-breaking system aimed at home users.

The company’s “LiFi@Home” system has been launched at a major industry conference in Barcelona.

LiFi is a wireless technology that uses light rather than radio frequencies to transmit data and aims to provide faster, more reliable wireless communications compared to conventional technologies such as WiFi and 5G which can suffer from congestion and interference.

PureLiFi chief executive Alistair Banham said the company had demonstrated for the first time “how simple it is to bring LiFi into consumer environments”.

“LiFi is the key to unlocking the next generation of connected experiences in an ecosystem where WiFi and 5G alone are not enough,” he said.

The number of connected devices in the average US home has more than doubled in the past two years, according to Deloitte.

As more devices connect to struggling home WiFi networks, bandwidth is split, interference increases and response times slow for everyone.

“Adding LiFi to a home will not only accommodate the growing demand for connected devices, it will also improve the user experience,” said Banham.

In December PureLiFi secured a fresh multi-million-dollar supply deal with the US Army.

The agreement will see the firm supply the army with thousands of additional units of Kitefin, described as a “next generation optical wireless communication system”, which uses LEDs (light-emitting diodes) for secure data transmission instead of radio waves.

PureLiFi said Kitefin “has the potential to save missions and lives”.