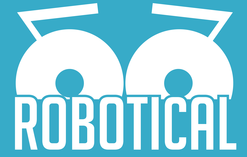 Robotical are a robotics company based in Edinburgh. We make Marty the Robot, a walking, dancing, eyebrow-wiggling, football-playing, fully programmable robot that will inspire the next generation of roboticists and engineers. Robotical was sounded by Dr Sandy Enoch, who after completing his PhD in robotics at the university of Edinburgh, wanted to buy a Christmas present for his niece that reflected the type of work he had been doing. Unfortunately everything on the market was either a novelty toy or a very expensive robot. So Sandy invented Marty the Robot to be an accessible introduction to robotics that crucially provided a real learning progression.

After a successful crowd funding campaign on the Indiegogo platform that took place in 2016, Robotical delivered 1000 robots to customers in 54 different countries in 2017. Later that year the company closed a £285,000 seed round with a group of angel investors that included Gareth Williams of Skyscanner. In 2018 Robotical have manufactured a further 3 batches of product and have signed deals with distributors around the world. Recently, Robotical organised an Edinburgh-schools coding competition in collaboration with CGI and City of Edinburgh Council. 33 schools competed to be crowned the winner of Marty’s Coding Party 2018!

Where do you see yourself/your company in five years?

We want to be making the best educational robots in the world. We already have Marty the Robot available in many different countries (we have distributors based in South Korea, Hong Kong, Spain, France, Belgium and Greece to name a few). However, the goal in 5 years will be to have Marty as the default programmable robot used in classrooms in these countries as well as, of course, in Scotland.

What’s your role and what does a typical day involve?

I work in business development for Robotical. I am responsible for prospecting new partners to sell Marty in various markets and generally getting the company message out to a wider audience. Normally I speak to current distributors we work with in the mornings and then work on strategy later in the day. I am often out the office and travel a lot early in the year during trade show season. As a result it is quite hard to describe a typical day as every day is very different! This year I have travelled to Ireland, Spain, Germany, South Korea and the USA as well as numerous locations across Scotland and the UK to spread the Marty the Robot gospel…

If you could give one piece of advice to an emerging business/startup, what would it be?

Be confident in your ideas but open to advice. Try to cultivate relationships with experienced individuals that you trust and make sure you thank them for their advice when success begins to come your way.

What’s your favourite thing about your job?

I love being part of a rapidly growing business with a mission to make education fun. It sounds clichéd but being part of a start up allows you to make a difference – the result become very obvious to you very quickly – perhaps a deal allows you to hire another member of staff or a schools competition makes it immediately evident that our product has inspired a young person.

If you were speaking to a classroom full of 3rd year high school students how would you pitch the industry as the best place to be?

Getting involved in the technology start-up space is an incredible place to be – you really can change the world with technology. I would also point out that you don’t even need to have a ‘tech background’ academically to be a part of it! I studied International Relations at University and also had good foreign language skills from school (French and Spanish) – but certainly did not specialise in Science/Maths/IT etc. Awareness of different cultures and the political reality is vital in business and I would encourage a wide range of individuals to consider the tech field when looking at career paths. That being said our ethos is to encourage mores students to see STEM subjects as fun and accessible and hopefully we could demo Marty the Robot to inspire the S3 students to consider taking STEM subjects further than they might otherwise have done. More and more jobs will require individuals who have a background in STEM as the fourth industrial revolution rolls out… you will certainly be in demand if you develop technical skills during your education.