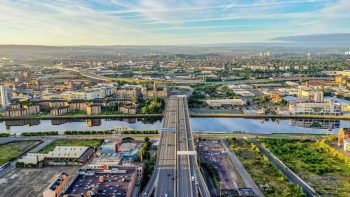 The recently launched open data hub offers a view on how the city operates.

The hub is a place to access data, provide tools to enable people to visualise this, and to tell some simple stories about what the data means for the city.

The aim is for it to also be a place to engage with citizens and other stakeholders around particular themes supported by open data.

The development of the hub helps to deliver on some of the underlying objectives of the current Digital Glasgow Strategy, which sets out the council’s priorities in developing the city’s digital economy, with the hopes of transforming Glasgow’s public services through the use of digital technology and data.

The city council wishes to add a wide range of data to the hub in the future, covering a range of topics including the environment, transport and movement, as well as the economy, education and the government.

Some of the new data made available focusses on movement across the city such as cycling and walking, as well as the impact of the pandemic.

Other data demonstrates the impact of the pandemic at a neighbourhood level – for example, recently released open data on cycling in the city centre showed a drop of 20% in cyclists as a result of the lockdowns in spring and autumn/winter 2020, with a slow recovery of numbers in 2021.

The data also seeks to monitor Glasgow’s broader recovery. For example, city centre footfall increased as a result of the recent easing of restrictions in late July/early August – there were 5% more people in the city centre during August than in July.

This figure jumped by 86% for late night footfall where the hours of midnight to 4am were compared.

Angus Millar, Chair of the Digital Glasgow Board, said: “The use of data can help us understand our city better, support innovation and drive improvements in the delivery of public services.

“Glasgow’s Open Data hub offers us – the council and our partners, as well as residents, business and organisations in the city – the chance to take a new and unique look at how Glasgow operates, to see what works well in the city and how it could be improved.”