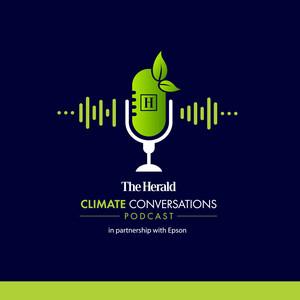 A wide-ranging discussion with host Marc Strathie, Head of Research and Policy for ScotlandIS, covers everything from Scotland’s position as a leader in climate change to the importance of political will globally – and how those politicians have been in the wake of scientific and public opinion. They look at the industries that have a significant impact on the feasibility of achieving Net Zero by 2030 and how the Royal Scottish Geographical Society is helping to bring people up to speed on climate change as quickly as possible.

First though, COP 26. Robinson describes it as a “cumbersome beast”, but also says that “it’s difficult not to get excited about what might come from it because, in theory, a big and bold pronouncement might set us all on a different direction.

“The reality is, however, it’s a negotiation between all the world governments, so there’s always compromise. I think what came out of COP for me was that scientific opinion has been well ahead of politicians on this for a number of years. We’ve known about climate change since 1979 and we’ve been very, very slow to respond.”

Robinson also believes that COP showed that public opinion is also way ahead of the political mood. There was a sense that the political establishment is catching up, but still has a long way to go.

COP also showed that Scotland is showing leadership, says Robinson, even though “somebody described it as the fastest snail in a race”. Even though there is still much to do if Net Zero 2030 is to be achieved, Scotland can use its international alliances with more progressive nations to influence those who are struggling to engage.

He tells Strathie that the difference in Scotland came from civil society. The pressure that came from the Stop Climate Chaos Coalition led to the cross-party support for a Climate Change Act.

“All the parties pushed for higher targets again, and every party signed up. Well, apart from the Green Party, because they wanted it to go further,” says Robinson.

The Royal Scottish Geographical Society has created climate change educational resources, with two projects in particular discussed here – the Climate Solutions Accelerator programme and a documentary film called Scotland: Our Climate Journey.  The one-hour documentary is available to any community that wants to screen it.

“The documentary looks at how that popular support came about, how the act came about, and importantly, what the impact has been,” says Robinson.

“It shows you what’s going on in different industries, such as energy and whisky and peatland management areas. Some are already delivering great things and we’re not recognising that enough.”

Robinson identifies two areas as important in the frontline fight, even though the headline issues in both mask a deeper need to change.

“If Scotland is going to meet its climate targets, we can’t do it without the agricultural sector. And actually, it’s not just about meat. Meat is one part of that, although my argument is that most of that will be picked up by consumer demand changes. It’s a much more nuanced and difficult conversation.”

As far as transport is concerned, Robinson believes that electric vehicles are important, but changing behaviours around transport is more pressing.

“Unfortunately the pandemic has put halt to a lot of the good work there. A lot of people don’t feel comfortable or safe on a train or a bus. A slight counter to that drift has been the increase in walking and cycling.

“It really is a worry that people still aren’t really taking it seriously in some cases, or don’t really know their way around it. We need people to understand the issue properly.”

To listen to the new episode, simply search for Herald Climate Conversations in your app store or find the podcast on Apple here, and on Spotify here.