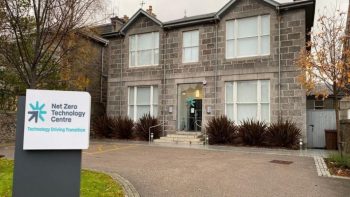 With climate change becoming more important, and the role of renewables in Scotland’s economy increasing, the Net Zero Technology Centre will support the country’s green ambitions.

The move reflects the centre’s increased development and deployment of technology to enable a net-zero energy future.

A key part of the transformation was redefining the centre’s technology roadmap following extensive engagement with industry and stakeholders, which has resulted in a comprehensive set of technology themes and priorities underpinning the Net Zero Technology Centre’s work.

CEO at the Net Zero Technology Centre Colette Cohen said: “Innovating and developing technology is critical to unlock an affordable net zero energy future. It is essential we invest in and commercialise solutions that accelerate the energy transition and reimagine the North Sea as an integrated energy basin.

“There is no silver bullet when it comes to the technology required. We must prioritise affordable energy solutions while decarbonising oil and gas, which will be required for years to come to meet global demand.

“Our focus on transition technologies began when we opened our doors four years ago, driven by strong demand from industry. We see a tremendous opportunity to build exciting new partnerships and alliances as we continue to develop and deploy technology to create an affordable net zero energy industry.”

To date, the Net Zero Technology Centre has co-invested £176 million with industry, screened more than 1,300 technologies and generated £10-15 billion GVA potential. The centre has delivered 64 field trials, with another 49 planned and underway. In addition, over 20 technologies have been commercialised and 33 tech startups supported.

Economy Secretary Kate Forbes said: “I fully support the Net Zero Technology Centre rebranding, which aligns with their fresh purpose of supporting the oil and gas industry to develop and deploy technology to accelerate the transition to an affordable net zero North Sea.

“They are also one of our key partners in the Aberdeen City Region Deal, which is backed by £125 million of Scottish Government funding over 10 years, contributing to the region’s economic recovery by creating jobs and providing the commercial infrastructure to support and attract businesses to Aberdeen and the surrounding areas.

“This is a crucial time for business, trade and investment in Scotland and investing in our communities will ensure every part of Scotland recovers from the pandemic, helping build an economy for everyone.”

Scotland’s renewable energy targets include providing 50% of its energy demand for electricity, heat and transport from renewables, and to become a net-zero economy by 2045. Scotland missed its 2020 goal, when it aimed to produce 100% of its electricity demand alone for renewables, falling just short at 97.4%

At present, Scotland is less than half-way to meeting its 2030 goal.

According to consultancy FarrPoint, increased adoption of digital technology, including fibre broadband and 5G, is needed to meet Scotland’s 2045 target.