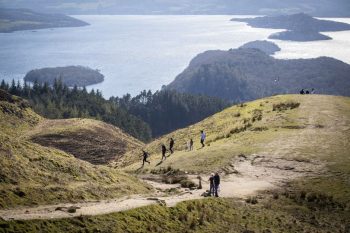 Edinburgh-based tech start-up, Whereverly, is hoping tourists over the Jubilee bank holiday weekend will give it the data it needs to help prevent future overcrowding at visitor hotspots.

Whereverly is working with bosses at the Loch Lomond and Trossachs National Park, as well as Stirling Council and Perth and Kinross Council, to help them deal with some of the problems that have come with surging tourist numbers, such as traffic jams, litter and so-called “dirty camping”, where campers leave sites covered with litter and damaged by fires.

A tech platform is being developed which uses data from sensors which will count footfall and traffic within the national park, allowing them to show in real time which areas are busiest.

Together with on-the-ground observations added by countryside rangers, this will be used to inform an algorithm which will predict areas and times for overcrowding.

Social media and electronic road signs can then be used to give visitors alternative suggestions on where to go.

Iain McNeill, managing director of Whereverly, said: “We’re using technology to tackle a problem that has come about due to the pandemic.

“It’s great that many more people are exploring the natural environment closer to home but it is putting areas such as Loch Lomond and Loch Tay under strain.

“The upcoming holidays will be a significant test and an important opportunity to gather the data we need to train the algorithm we hope to use in future.”

He continued: “In developing our product, we have already spoken to a range of users of the national park – even regular motorhome users were surprised to see the alternative locations that exist within the park, so in future they don’t have to go to the same crowded spots.

“This is about giving people information to make informed choices, so we can continue to enjoy a booming visitor economy but more evenly spread.”

Matt Buckland of the Loch Lomond and the Trossachs National Park Authority said: “If not properly managed, large numbers of visitors can put pressure on the natural environment, communities, businesses and the experience of tourists themselves.

“There are different ways of addressing these issues and one of them that is currently under-utilised is the effective use of technology.

“Our visitors having access to up-to-date information to allow them to make informed decisions before starting their journey can help to alleviate these issues.”

He added that the data could also be used by park staff to ensure rangers “can be deployed efficiently”.

Buckland said: “Working with Whereverly and the other partners is an exciting opportunity to introduce a smarter way of managing visitors to Scotland’s beautiful landscape, to ensure it can remain special for those who live and work in these areas and the tourists themselves.”

TravelTech for Scotland, an Edinburgh University-based project, is currently working to support the travel technology sector.

Its director Josh Ryan-Saha hailed Whereverly’s work as a “great example of the innovation flowing from Scotland’s thriving traveltech sector”.

He said: “By combining data from sensors with human input from workers on the ground and applying an algorithm we could see an end to the kind of over-tourism that has given Scotland a real headache in recent years.

“Traveltech is all about improving the quality of experience, and it’s exciting that some of the most innovative work in this area is happening right here across Scotland.”