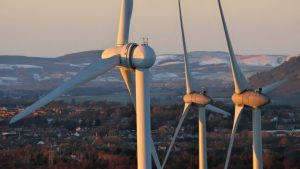 The tech will be the “key component” of a green hydrogen project close to ScottishPower’s Whitelee windfarm.

Energy provider ScottishPower has announced plans for a 20-MW electrolyser as part of a green hydrogen facility to be built near its Glasgow wind farm.

The electrolyser will be an integral part of the new facility, with the firm also submitting applications for a combined solar and battery energy storage scheme to power the electrolyser.

ScottishPower says the facility will be an important step towards Scotland’s ‘Green Hydrogen for Glasgow’ project, a partnership between ScottishPower, BOC and ITM Power, to create green hydrogen production facilities with clusters of refuelling stations across Scotland.

Once up and running, the clusters will allow Scotland’s renewable wind and power generation capacity to be converted to hydrogen for use by vehicles, supporting efforts to achieve net-zero by 2045.

Whitlee Wind Farm is the first site where planning permission has been sought as part of the project, which is designed to provide “carbon-free transport and clean air” for communities in Glasgow, boosting the city’s plans to become the first net-zero city in the UK by 2030.

Commenting on the news, Barry Carruthers, ScottishPower’s Hydrogen Director, said: “With all eyes set to be on Glasgow later this year as the city hosts the UN’s 26th climate change conference, COP26, it’s fantastic to be making this next important step towards delivering green hydrogen for Glasgow.

“Whitelee keeps breaking barriers, first the UK’s largest onshore wind farm, and soon to be home to the UK’s largest electrolyser. The site has played a vital role in helping the UK to decarbonise and we look forward to delivering another vital form of zero-carbon energy generation at the site to help Glasgow and Scotland achieve their net-zero goals.”

Mark Griffin, Hydrogen Market Development Manager for Clean Fuels at BOC said: “The scale of this project demonstrates the growing demand for clean hydrogen and as a member of the Green Hydrogen for Scotland partnership, we’re delighted to bring our hydrogen mobility and refuelling project expertise to help deliver a ground-breaking facility in Glasgow.”

Hydrogen and wind power are set to become two of the main sources of renewable energy as part of Scotland’s aim to become net-zero. It is intended that the green hydrogen project will supply hydrogen to the commercial market before 2023.

Renewables have now become a major part of energy provision across Scotland, and the University of Strathclyde and Eni announced plans in March to train Scottish oil and gas workers to transfer skills to the renewable energy sector in preperation.

Both sides agreed to combine their respective expertise – Strathclyde in renewable energy and Eni in offshore operations and industrial know-how.