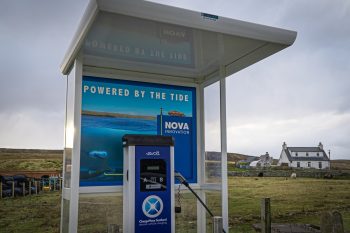 Scottish energy company Nova Innovation has created the first ever electric vehicle charge point using a source of tidal energy, on the island of Yell in Shetland.

Nova’s tidal turbines have been powering homes and businesses at the Scottish archipelago for more than five years; we investigate their evolution and the company’s hopes to replicate the model in other locations around the globe.

Tidal energy is an abundant renewable source on a planet covered by 70% water yet remains largely untapped.

At present, approximately 522MW a year is generated globally by tidal energy.

Yet in the UK alone, a potential 10GW could be generated annually by tidal energy. This would be enough to power 15 million homes and offset 70 million tonnes of CO2 emissions. Moreover, tidal energy could have a market potential of around 100GW.

Tides are far easier to predict than how much sun or wind will be available for other renewable sources. Tidal turbines are also turned with more force than their wind equivalent, as water has a greater density than air.

However, despite the world’s first tidal power station being built as far back as 1966, the energy source has not taken off to the same extent as solar and wind.

Tidal’s part in the climate solution

But this could all be about to change, as governments seek new ways to slash carbon emissions. Scottish company Nova Innovation is one of the companies leading the way in tidal energy.

John Meagher, business development director at Nova Innovation, says: “More people are now recognising that tidal power is part of the solution to the climate emergency. Governments around the world are committing to drastically reducing carbon emissions and moving away from a reliance on fossil fuels, while at the same time the world’s demand for energy continues to increase.

“Solar and wind are essential for our future but are not sufficient to bridge the gap on their own to meet our net-zero carbon targets.

“The development of tidal energy is similar to the evolution of the wind industry. All successful developers in wind started at the kilowatt level before scaling up. We are seeing a similar trend in tidal energy. This approach accelerates learning and product innovation.”

Nova Innovation was only founded in 2010. But the company has been making rapid progress with its tidal turbine technology. In 2018, the company teamed up to combine its tidal turbines with Tesla’s energy storage capabilities. The result was the world’s first tidal power station connected to the grid, delivering constant and variable power whenever it is needed. And Nova has been proving its technologies in Shetland.

Petrol and diesel vehicles account for almost 20% of the UK’s CO2 emissions. To meet reduction targets for carbon emissions, the Scottish Government passed legislation to prevent new petrol and diesel cars from being sold by 2032. More energy from renewable sources is vital if electric cars are to cleanly replace diesel and petrol vehicles on the roads.

To help meet this demand, Nova Innovation has built the world’s first charge point for electric vehicles (EVs) that is powered entirely by tidal energy. The charge point is on the Shetland island of Yell and was funded by a grant from Transport Scotland.

Meagher says that Shetland’s location and environmental conditions have provided an ideal location to prove the technology: “The UK has one of the largest tidal resources in the world. Shetland has a fantastic tidal resource and Nova selected it due to the good site conditions and the clear opportunity to displace diesel generation.”

The EV charge point is the latest of Nova’s tidal energy projects in Shetland, with the company’s turbines providing power to homes and businesses for more than half a decade. In 2014, Nova developed a 30kW turbine prototype.

Then, two years later in Shetland, the company built the first offshore tidal array in the world, which involved three 100kW turbines. They function similarly to a wind turbine, only underwater and turned by the natural flow of water.

“The ingenuity behind the design is clever simplicity. Reliability is improved when components that could potentially fail are removed. Nova’s new M100-D direct drive tidal turbine has lowered costs by 30%,” explains Meagher.

The predictability of tidal power

Meagher explains how the predictability of tidal energy gives it an advantage over other renewable sources. Instead of building a dam or large intrusive structure, Nova’s turbines can sit individually or in groups on the floor in deep or shallow water, large rivers, and estuaries.

“What makes the case for tidal stream energy compelling is its predictable nature. Wind and solar power have driven us forward at an incredible pace when it comes to approaching net-zero targets, but they are not entirely predictable. Tidal energy can add much-needed predictability within the grid using a purely renewable resource.

“Another popular aspect of tidal power is that our underwater turbines are hidden from view and there is no visual impact on the landscape. There are no dams, no barriers and there is no navigational impact – ships and vessels are able to sail above our tidal arrays without any issue,” adds Meagher.

One concern with tidal energy is the potential impact on sea life. Yet Meagher says that this is an area his company is watching closely, with no issues detected so far.

“Marine wildlife is free to move around the turbine and extensive environmental monitoring at our tidal array in Shetland has detected no adverse effects on the marine environment.”.

Having proven the technology in Shetland, Nova is now in a position where it is scaling up and internationalising its business. Later on this year, the company is due to deliver the Nova Scotia Tidal Array in Canada, consisting of 15 turbines capable of generating a combined 1.5MW.

Homes and businesses will receive clean and reliable electricity from Nova Scotia Power, the Canadian utility. And there are other international projects Nova is delivering around the world.

“We have projects across Scotland, the UK, France, and North America. We also have plans for projects in Indonesia across Asia. By 2030, we will be installing turbines across the world,” adds Meagher.

Another common reservation with tidal energy is the costs involved. Establishing a new energy source is not cheap. Yet Meagher suggests that costs associated with tidal are already falling thanks to Nova’s innovations, with further cost reductions expected as the technology becomes more widely adopted. Meagher also suggests that tidal energy is on course to be more cost-effective than nuclear and fossil fuels by 2030.

“Developing any form of new energy technology is expensive. When coal, oil, gas, nuclear, solar, and wind started off, they all received financial support from governments to enable them to be commercialised. Over time, costs fell as technologies matured,” adds Meagher.

“Tidal energy is a new technology, but costs are coming down. It is already price-competitive with diesel generation, which provides significant benefits to remote and island communities that often rely on diesel imports for power.”