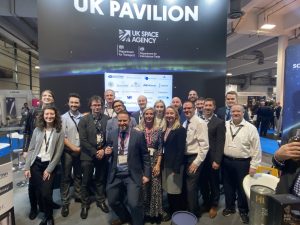 An initiative led by organizations from Scotland’s fast-growing space industry has been showcased at the Space Tech Expo Europe exhibition in Bremen, Germany.

Believed to be the first sustainability strategy of its kind, Sustainable Space – A Roadmap for Scotland was originally kick-started by funding from Scottish Enterprise and unveiled in front of the domestic space sector during September at the Glasgow Science Centre.

However, the importance of leveraging the work on the global stage as a means of securing new international partnerships was recognized by industry-led group, Space Scotland.

The organization’s Environmental Task Force, set up in 2019 as a voluntary grouping of over 20 UK-based space companies, universities and government agencies, had called for the space sustainability Roadmap’s creation at the start of this year and went on to provide guidance around the resulting eleven work packages that the document prescribes for the sector.

The international showcase event was also used as an opportunity to highlight Scotland’s end-to-end space industry.

Scottish Development International, the international arm of the Economic Development Agencies of Scotland, and Space Scotland had exhibited at Space Tech Expo Europe in Bremen for the first time, also this Scottish showcase event, in cooperation with AstroAgency and the Department for International Trade.

Director of Space Scotland, Daniel Smith stated, “We’ve been excited by the level of interest in the Roadmap since it was published earlier this year, particularly from international space agencies. The event in Bremen has been an excellent platform for moving those partnership opportunities forward and a further step in demonstrating the intention of Scotland’s space stakeholders across industry, academia and government to play a proactive role in developing an environmentally conscious commercial space sector.

Having collaborated locally and internationally to produce the Roadmap, the aim now is to share what we’ve learned and champion the need for similar strategic initiatives, with more than 80 countries around the world developing space programmes and that number expected to grow”.

Scotland’s approach to creating a sustainable space sector that limits its impact on both terrestrial and space environments has caught the attention of renowned space environmentalist from the University of Texas at Austin, Professor Moriba Jah.

The space scientist commented, “I’m very proud to be a GlobalScot and honoured to have my voice pulled into this critical strategy. We must aim to develop a circular space economy focusing first and foremost on the prevention of pollution by minimising single use satellites and rockets via reuse and recycling.

Scotland has a long history of subscribing to the belief that all things are interconnected and embracing an intergenerational contract of stewardship. Humanity is in an existential crisis and the only way through it is by having a successful conversation with the environment. Alba is leading the way”.

Shortly after the space sustainability Roadmap was published, Scottish Enterprise announced its intention to contribute to the next phase of the initiative too, by launching the Applying Space Data to the Net Zero Economy innovation challenge, which is closely aligned with a key theme from the document; Environment and Net Zero.

Sharon Pryde, Space Specialist at Scottish Enterprise said, “The Roadmap, instigated by Space Scotland’s Task Force and delivered by AstroAgency and Optimat, has helped to formalise the Scottish space industry’s desire to use space to combat climate change and support multiple sectors in their drive towards net zero.

We are pleased to announce that we have already received numerous applications to our innovation challenge for support with projects that use data from satellites to protect the environment, from safeguarding woodland and peatland to cataloguing global shipping emissions and much more. We will be announcing the winning projects very soon.”

She added, “We firmly believe this further demonstrates the Scottish space sector’s serious approach to the critical topic of space sustainability”.

Space Sustainability – A Roadmap for Scotland can be downloaded for free via the Space Scotland website. The topic will be covered in an upcoming Space Cafe Scotland webinar, hosted by industry media publication SpaceWatch.GLOBAL.