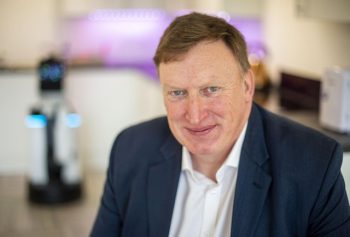 Delivered by Heriot-Watt University and the University of Edinburgh, the venture is part of the Data-Driven Innovation initiative, supported by £21 million from the UK Government and £1.4m from the Scottish Government through the £1.3 billion Edinburgh and South-east Scotland City Region Deal.

It is expected to open on Heriot-Watt’s Edinburgh campus in the autumn, having been previously earmarked to debut in the spring. However, amid its bid to bring about societal benefits, it has already flagged activity regarding a robot that can clean train carriages, looking at whether another has a beneficial effect on people with dementia, and its work on a robot dog to help experts understand hazardous environments.

Mr Miller’s appointment as the National Robotarium’s first-ever CEO was revealed in September, a move branded a “major milestone” in the development of the UK’s tech economy.

He explains that he has spent the last 20 years in senior business leadership roles, including chief technology officer at Innovate UK, and at aerospace giants Leonardo and BAE Systems, having started out as a design engineer working in the field of fast jets.

As for why he took on his current role, “I saw the opportunity to help build a business with great purpose, leading a team to deliver something that both creates economic benefit and inspires engineers to start their career journey, just like I was inspired all those years ago”.

Read the full interview covered in The Scotsman.